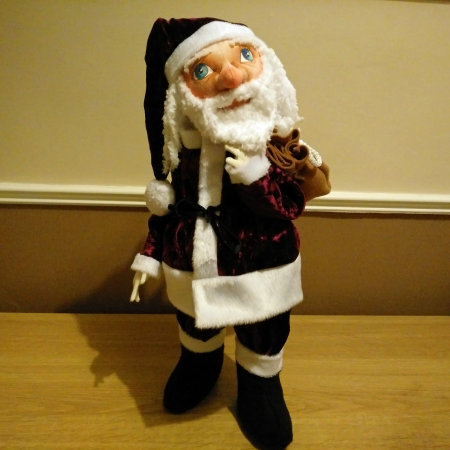 The first task was to adapt my original doll pattern in order to make a Santa. This was achieved by increasing the middle of his body in keeping with the friendly cuddly Santa image. No changes were made to the head pattern, but the legs were widened a little with a bottom added to give it stability. After the legs were made and attached to the body, they seemed far too long and thin. I went back to the drawing board and created much wider legs, which helped to make them look more like they belonged to the rest of the body.

The face and neck were rendered with water coloured pencils, the beard was crocheted, the hair was sewn in using strands of wool.

Santa was first given long johns made out of cream jersey fabric. He was then clothed in purple velvet trousers, in addition to a purple velvet hat and coat trimmed with white fur. The boots were made out of black felt, also trimmed with white fur. I couldn't find anything suitable to use for the belt except some black velvet lace, It doesn't work as well as I would have wished, but the aim of the project was to use only what I already possessed, so no spending. Santa wouldn't have been complete without his sack, which was made from brown felt, with piping cord for closing.

This is a picture of the final result. Let me know what you think by sending me an email. Link text here...